Previous Next
Microbiota and mental health 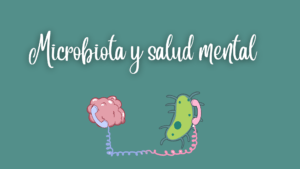 Following the same line we are going to talk about the importance of the intestinal microbiota and a good state of mental health.

There are 5 pathways of connection between the microbiota and the brain:

The main modulatory pathway through which signals reach the brain from the intestine is through the vagus nerve.

An altered microbiota and dysbiosis affect both the communication of signals through the vagus nerve and the release of neurotransmitters.. This has a significant impact on the appearance of psychiatric manifestations.

This stimulation of the vagus nerve can take place through the administration of probiotics and prebiotics. (minimum for 4 weeks) leading to a decrease in brain regions involved in the emotional processing of negative/sad stimuli.

People who suffer from or are at increased risk for mood disorders process negative and positive stimuli in a biased manner (these biases depend on the specific nature of the stimulus).

Emotion bias represents a key marker of depression and anxiety.

In contrast, antibiotic use, which alters the microbiota in a negative way, is related to a greater bias toward sadness.

Maintaining a healthy and diverse microbiota through a healthy lifestyle and proper nutrition can prevent the onset of psychological disorders.